We clear blocked drains in Broadstairs

We also offer a complete range of drainage services to our clients at very competitive prices.

What customers in Broadstairs do we work for?

We have successfully cleared blocked drains in Broadstairs, for the following clients:

How much does it cost to clear blocked drains?

First of all, there is NO call out charge to visit your Broadstairs property. We charge a fixed fee to unblock your drains. There are no extras. You would be surprised how many companies will offer a small fee over the phone and when the work is done, other charges will appear.

If our drain engineer visits your home in Broadstairs and finds further problems with your drains, we can quote for this, and you can decide whether to proceed or not with the additional work.

As well as unblocking drains, we offer the following services to clients in the Broadstairs area:

If you are not sure what you might need, please get in touch for FREE help and advice.

What areas of Broadstairs do we cover?

If you have blocked drains, but aren't sure if your property is in our area, please just ask.

Why choose us to unblock your drains?

What do customers in Broadstairs think of our work?

We ask our customers to add feedback to our checkatrade page, once the work has been done.

Our checkatrade latest is 9.89 out of 10 from 286 reviews - Broadstairs customers like us!

Some of our recent drainage jobs in Broadstairs

For a FREE no obligation quote for drain cleaning, drain surveys, drain repairs or blocked drains in Broadstairs, please email enquiries@jettingservicesdirect.co.uk or call 01843 880 062.

Ask for a FREE quote 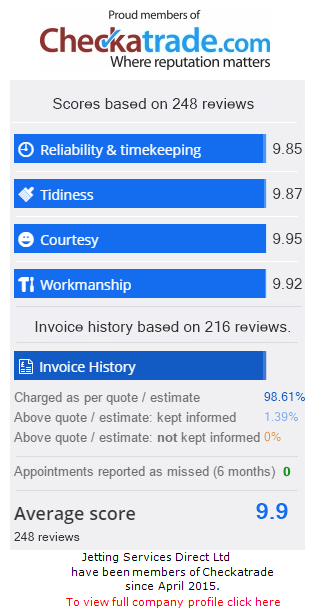